The Holiday Season was launched with temperatures worthy of the far north. Cold weather is positive for skiers! At such cold temperatures, the thin layer of water created by friction under the skis and allowing them to glide is no longer doing its job. Skis dig deeper in the snow and turns are much easier to undertake. Cold temperatures also bring those beautiful blue and cloudless skies that offer views of surrounding landscapes reaching as far as the horizon.

This cold wave was followed by two periods of warmer wheather. Just a few days after the beginning of the new year, temperatures reached freezing point, and even rose above it a few times. Despite the rain, skiing surfaces were fast and soft, much like conditions normally seen in March and April. We were then caught by a suprising temperature drop, going from 5 degrees Celsius to minus 20 in less than 24 hours. Skiing surfaces hardened and became much more rapid.

That brief freezing period was followed by another few warm days that allowed us to work the runs’ different snow layers and deliver very good skiing conditions. Our team worked on grooming a total of more than 156 in less than 52 hours.

According to the weather forecast, winter is expected back with mid-winter average temperatures and even some snow. Our team of groomers will continue working toward delivering beautiful snow conditions and we expect to reach the maximum of opened trails in the upcoming days. 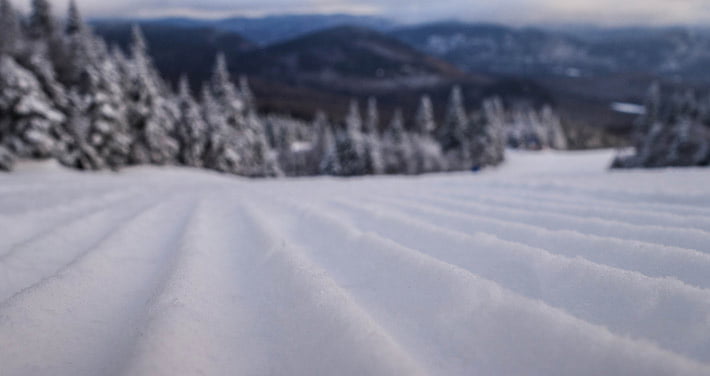 After the Leaves, Before the Snow: What to Do in Tremblant?

Biking in Tremblant: a 4-Seasons Sport