Tremblant is a magnificent training ground for several athletes practising different sports, including cycling, running (road and trail), but also for open water swimming. With Lake Tremblant at the foot of the mountain, swimmers from the region and surrounding areas meet there to improve their skills and prepare for their next challenges. We spoke with two Mont-Tremblant open water swimmers, Stéphanie Deschamps and Marie-Chantal Thibault, to get their advice and hear their experience in this aquatic sport. 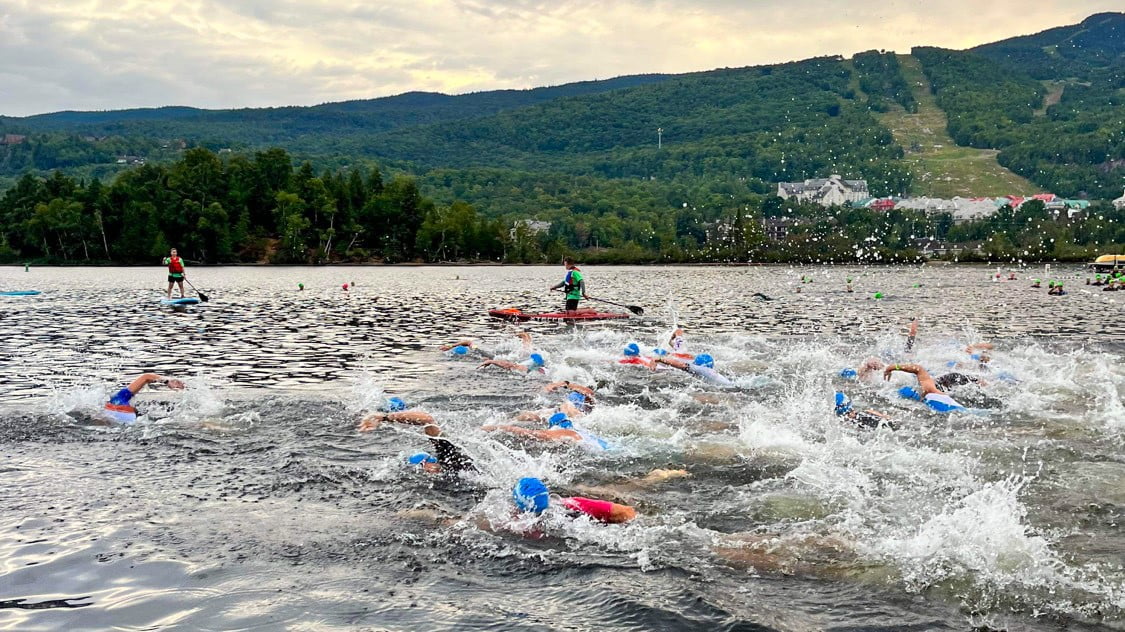 Where to Train at Tremblant

Lake Tremblant is, of course, a superb lake for training in open water. In summer, athletes have access to the CIRIM (Regional IRONMAN Mont-Tremblant Training Centre) located at the Tremblant Parc Plage to access a marked and secured swimming course. In addition, the centre provides several relevant information to swimmers, such as water temperature and a personalized training service. The CIRIM is also at the heart of the three IRONMAN courses, ideal for triathletes wanting to train for these events. There are also other lakes in Mont-Tremblant and the surrounding area to train in but considering that all the open water events in the region take place at Lake Tremblant, it is certain that most prioritize it to prepare for a race and to get used to its temperature, colour, and depth. Find the CIRIM’s maked swimming course here.

The city of Mont-Tremblant also has an indoor aquatic complex to allow people to swim during the winter. The complex includes a recreational pool and a semi-Olympic pool, in addition to a cardio training room. There are also several swim clubs in Mont-Tremblant that swimmers can join and train with, such as the Mont-Tremblant Swimming Club.

Of course, the wetsuit is the essential piece of equipment to have to swim in open water. It allows swimmers to keep warm in addition to improving the flotation. It also makes it possible to extend the swimming season and lake sessions. Some also have several wetsuits of different thicknesses depending on the time of the year and water temperature. Boots and gloves are also recommended in colder weather. Some also wear two bathing caps when it’s colder instead of just one to keep warm.

Swimming goggles are essential for swimming, both in lakes and in a pool. But it is highly recommended to get goggles with mirrored lenses for sun reflection. That way, when you’re swimming and it’s very sunny outside, you won’t be blinded.

A good practice in open water is also to never swim alone. It is strongly advised to always swim in pairs, except in marked and secured areas such as the CIRIM. This is simply a safety issue for swimmers.

An essential for training in open water is a buoy to be more visible in bodies of water. In a pool, to vary the training, some use hand paddles, flippers, boards, and traction buoys (mostly known as pull buoys).

Most swimmers swim year-round so they don’t lose their skills, winter in the pool and summer in open water. It is important to continue swimming even in winter to practise the swimming technique to be ready to enter the water at the start of the season at the end of May or beginning of June.

Outside of swimming, athletes do muscle building. It is important to do mobility and strength exercises to reduce the risk of injury. Therefore, many also practice cycling and/or running in their free time to work on their endurance. Stretching with rubber bands is also recommended to practise your arm stride while swimming.

Tips to Get Started

Probably the most popular advice for someone wanting to take up open water swimming is to take private lessons/have a coach or join a swimming club. It is the easiest, safest, and most motivating way to get started.

A good practice to start in this sport is also to start swimming in a pool, then transition to open water to feel at ease in the water. If you’re comfortable in a pool, you most probably won’t be in open water. 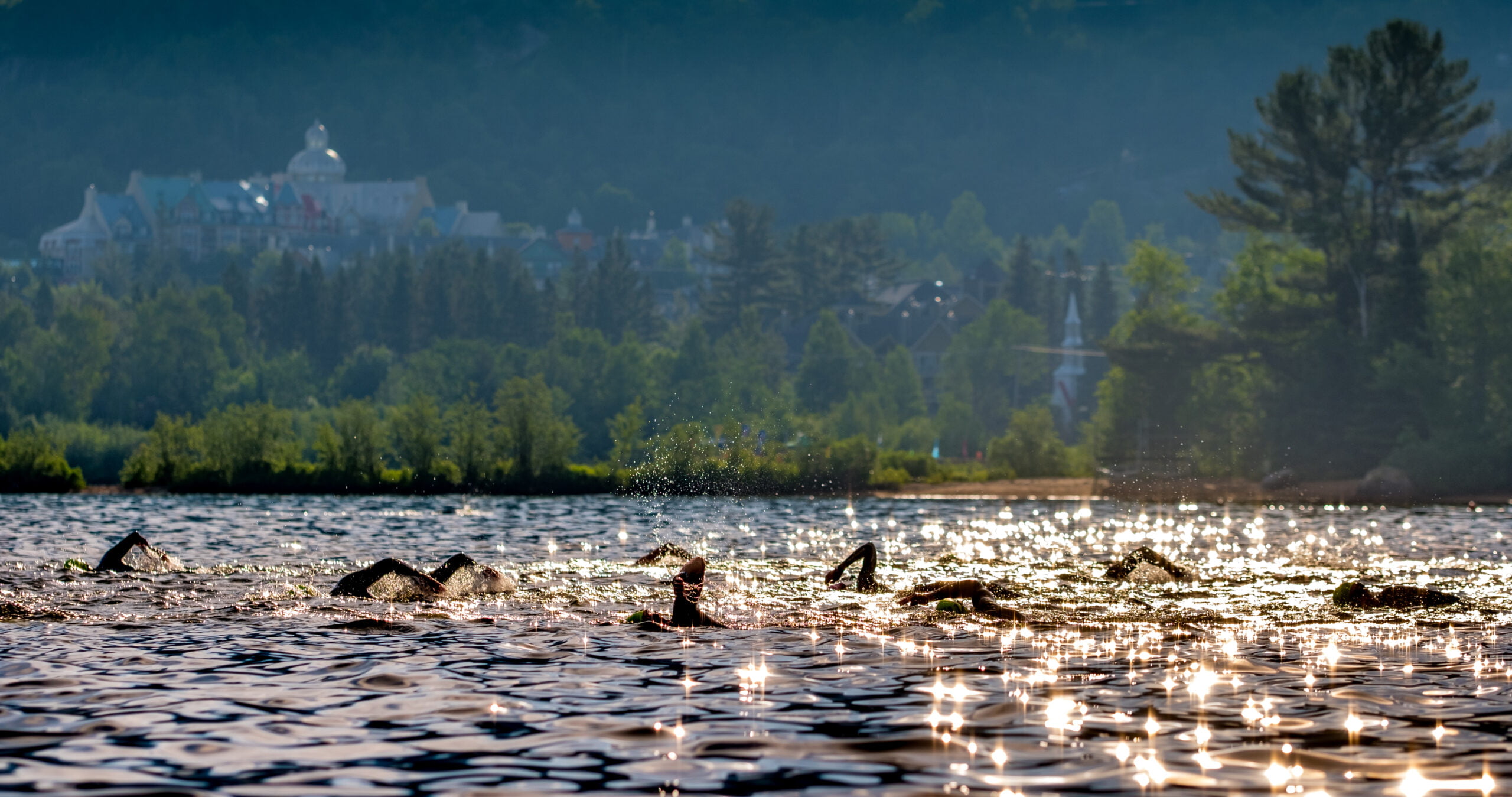 Swimming in open water remains like swimming in a pool since the technique is almost the same. However, the main difference is that there are almost no markings when swimming in open water. The lakes are often dark, so you cannot see the bottom, unlike in a swimming pool where you see very clearly the marks in the bottom of the pool as well as on the ceiling when swimming on your back. It is therefore easy top get disoriented in open water. There are also more waves in a lake than in a pool which makes it even more difficult to swim straight.

Another difference is in the swimming technique. Since they mostly swim in a wetsuit, swimmers in open water have a limitation at the shoulders versus in a pool where the wetsuit is not necessary. But this is not a disadvantage! In fact, in open water, the arm stride is shorter than in a pool to have more endurance while swimming.

The CIRM is the main resource for open water swimmers at Tremblant in the summer. There is also the fitness room at the brind’O Aquaclub in the pedestrian village, which is accessible to the public year-round.

Several coaches and clubs also do group outings during the season to get you used to swim with several people and thus feel at ease in the water during a race. These outings also help with performance. For example, if someone in the group is slower or has a poorer technique in a portion of the course, they can get help from a more efficient person to perfect their technique.

Tremblant hosts several sporting events each year. There are the IRONMAN events that include open water swimming in its disciplines. Did you know that it is possible to participate in these events as a team? Yes, you can take part in the IRONMAN relay, so one person per discipline. Every year, Tremblant welcomes triathletes from all over the world to take part in the three Subaru IRONMAN races of the season: 5150 Triathlon, IRONAMN 70.3 and IRONMAN.

There is also the Traversée du lac Tremblant in which athletes can swim distances of 1 to 12 km, individually or in teams. A full week of open water swimming in early August, including events, swim camps, and athlete and ambassador conferences. Plus, the 5 km and 12 km individual events are part of the official events of the North American Championship for the Global Swim Series.

Get to Know our Tremblant Swimmers

Having grown up on the shores of Lake Saint-François and with a swimming pool at home, Stéphanie has always loved water. She took her red-cross swimming lessons at the age of 5 and was even recruited by the Salaberry-de-Valleyfield competitive swimming club. Swimming has therefore always been part of her extracurricular life. She competed, which allowed her to discover the 4 corners of Quebec and Eastern Canada. When she arrived in Mont-Tremblant, she was swimming at the Saint-Agathe-des-Monts pool, at the Aquaclub La Source pool in the pedestrian village, and at Lac Ouimet in the summer. It was with the arrival of the IRONMAN events that she discovered the CIRIM and Lake Tremblant. She has also participated in the Traversée du lac Tremblant 4 times already, including the 12 km solo. Since 2015, she has resumed in-pool competition by following the Coupes du Québec schedule for Master Swimmers, which leads athletes at the end of the season to the Quebec and Canadian Championships. In 2017, she participated in the World Police and Firefighter Games, in which she swam 3.2 miles at sea, in addition to in-poo, events.

For Marie-Chantal, swimming entered her life only a few years ago. It was when work colleagues signed her up for the swimming portion of the IRONMAN Spring event that she made her debut in the discipline in 2017. It was then that she discovered her passion for open water swimming! It was with several months and hours of in-pool training that she swam for the first time in a lake barely 2 months before the event. Quite a challenge that she took up brilliantly! She has since also swum the 3 km event of the Traversée du lac Tremblant twice and competed in the IRONMAN Sprint and Olympic relay before the pandemic. A sportswoman at heart, she is very proud of her parish. She loves swimming in Tremblant, it’s her favourite playground.

Winter Activities for Every Taste

8 Reasons For Celebrating the Holidays at Tremblant