Preparations for the start of the 2013-2014 winter season

At Tremblant, we start the season in November the same we way we end it in Easter. As soon as weather permits, we begin snowmaking at Versant Nord. That side of the mountain is sheltered from the sun, making it generally colder and thereby allowing it to retain snow—a valuable commodity at the start of the season.

In the early stages of opening a run, it takes 2-3 hours for a four-person team to connect the snow canons to the water supply and the compressed air system. Once the connections have been made and the canons are operational, they keep working until the snow mound from the first canon has reached the second canon, and this process repeats itself. A period of 24hrs is needed for the surface to absorb the snow before the snow groomer can make new corduroy.

We always start snowmaking at the beginner runs, starting with the P’tit Bonheur, and then move on to the two “tapis magiques” in order to allow the Snow School to start their season classes. Once these preparations have been made, our team then moves on to the intermediate runs, Beauchemin Haut et Beauvallon Haut, to reach the TGV and Lowell Thomas mechanical lifts. In order to offer a well-deserved balm to relieve the freestyle snowboarders and skiers from their long wait, our snowmaking team will then deploy the canons on the Rope Tow beginner snowpark. Snowmaking continues on to the expert runs; Mc Culloch, La Traverse and la Rigodon, to finally end with other runs that are connected to the mechanical lifts.

It is important to note that our runs are 700 and 800 meters long in average and that it takes 3 full, 24-hour days of snowmaking to reach a snow base depth of 12 inches. The runs can be opened to the public only once the base depth has been reached. Generally, our snowmaking team tries to keep a base depth of 36 inches during the season and sometimes even doubles the thickness in anticipation of the spring snow season.

The Mountain Operations Team wishes you a great sliding season! 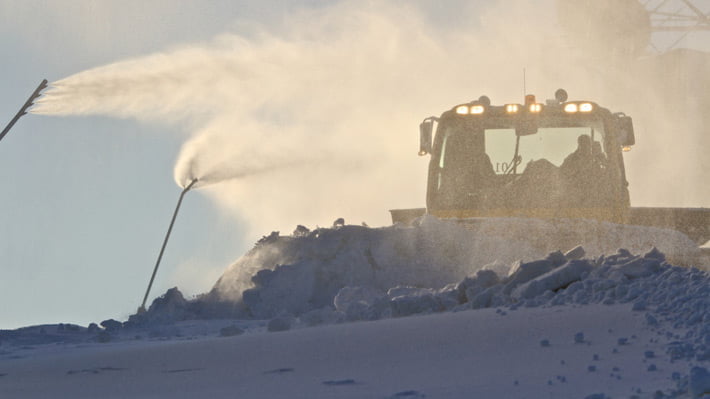 The Tremblant Ski Patrol: A Team Dedicated to Your Safety

Mountain Ops: After the Ski, Before Summer